The Canon C500 paired with an external recorder like the Odyssey 7Q+ produces beautiful images and has been used on some big Hollywood films. It has provided footage on movies such as Jason Bourne, The Big Short, The Man from Uncle, Avengers: Age of Ultron, The Wolf of Wall Street, After Earth and many more. It has also served Shane Hurlbut as his A camera on Need For Speed and Fathers and Daughters.

These days the C500 has become a very interesting camera for documentary filmmakers who are shooting interviews and B-Roll. When paired with a unit like the Odyssey 7Q+ it produces high quality beautiful images that are easy to color correct, however it has one major caveat! The C500 internal fans are noisy!!! Canon takes the stance that the C500 was designed as a narrative film camera and not optimal for the long takes of documentary film interviews. In my humble opinion when the internal fans first engage at 8-14 minutes it sounds like a vacuum cleaner starting up! I really love the images this camera produces and feel when paired with a device like the Odyssey 7Q+ it is a vastly superior camera to the C300, but the fan noise was a major concern for me. I set up a quick and dirty sound test for the C500 fan noise ( https://vimeo.com/188426060 ) so that others could listen to the issue.  Within a couple days I got a call from a talented sound editor friend in Los Angels who had been shown my test from a producer whom he frequently works with as a sound editor. This producer works on TV shows like “Bones”, “Prison Break”, and more. He was starting up a project and interested in using the Canon C500. He had seen my test and was also concerned about the fan noise, he showed it to my friend who immediately recognized me and reached out on behalf of this producer with a couple questions. 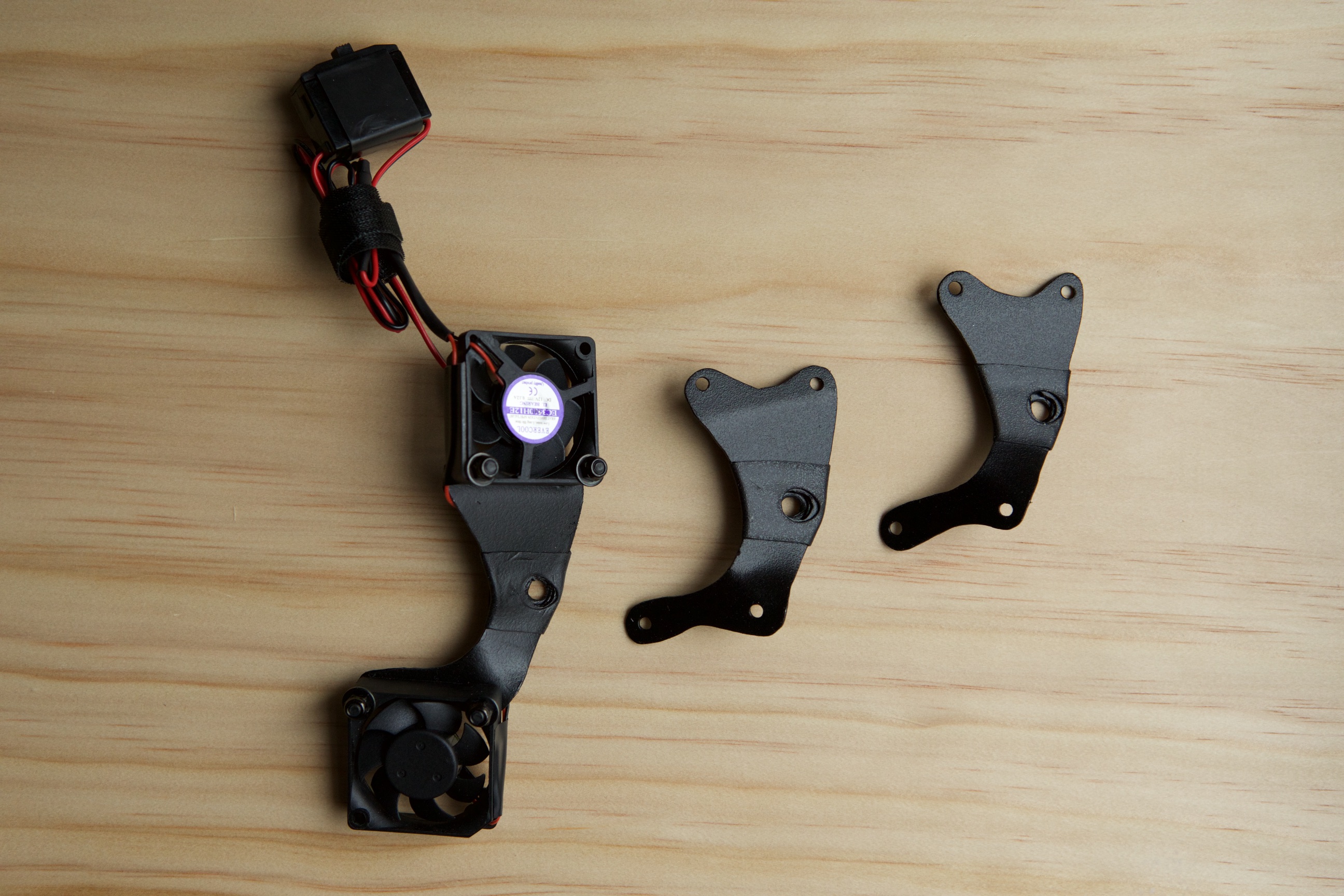 At this point I had already ordered and test out a couple small computer fans on my C500. I used sticky putty to hold the fans onto the camera during the tests. Although this was not a great long term solution it would quickly give me an idea if something like this would even work. I ran one fan pushing air into the lower opening and one fan vacuuming out air from the upper opening. With the fans in place I was able to record run camera for 1hr and 40mins without the internal fans ever triggering. I made another quick and dirty sound test to hear the difference between the attached external fan solution and the Canon C500 internal fans ( https://vimeo.com/189050004 ). I now felt pretty good about the camera because I knew I could fabricate a solution. 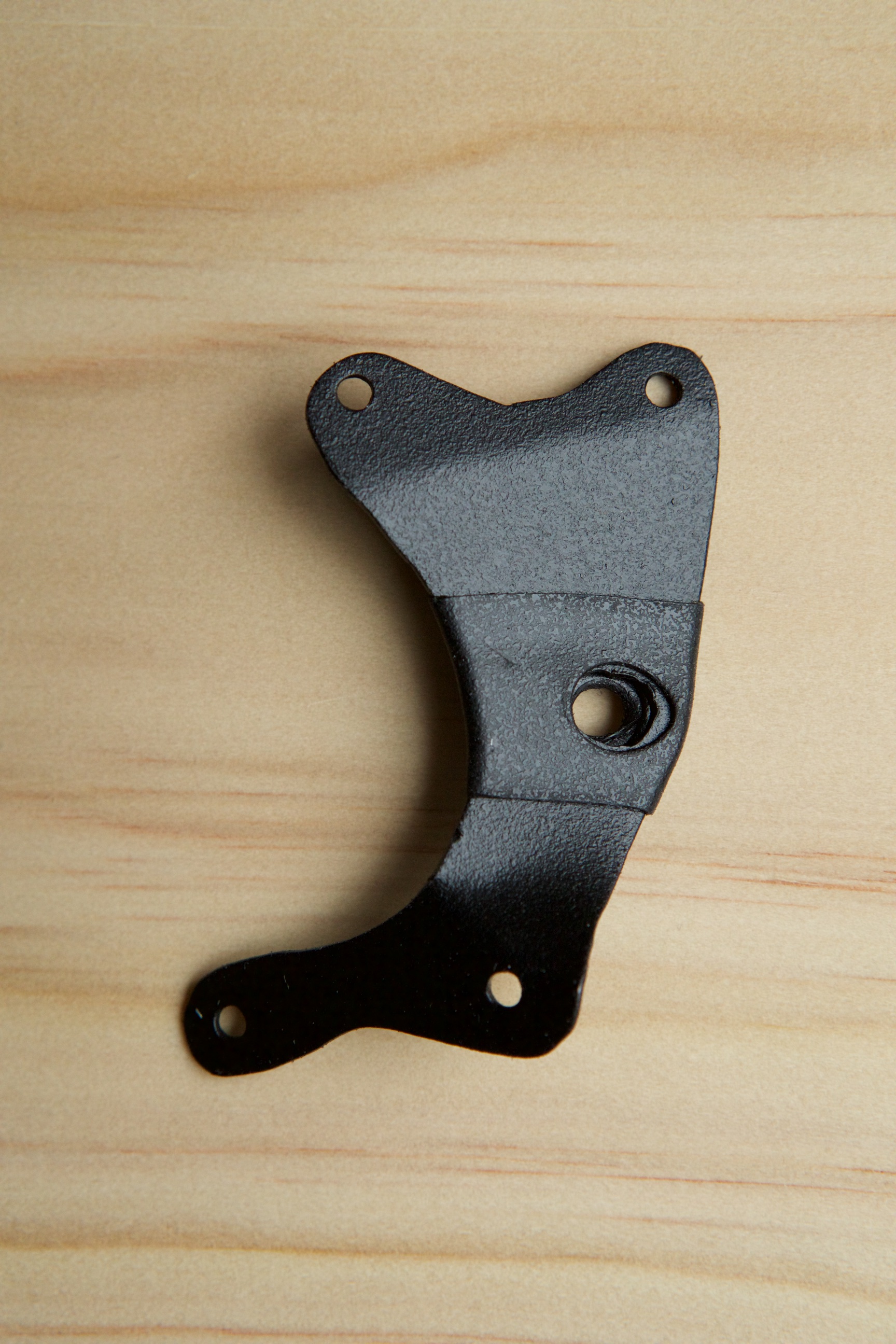 I bought a piece of 22-gauge steel sheet metal and cut a design I had drawn using a jigsaw. It was somewhat challenging to navigate the curves and I was a bit concerned about cutting off a finger. With that said, I finished with no trips to the hospital and was able to bend and manipulate the metal to hold the fans in place. I now had a working prototype.  We took it out on a pilot episode we are shooting for a new TV series and it worked perfectly! 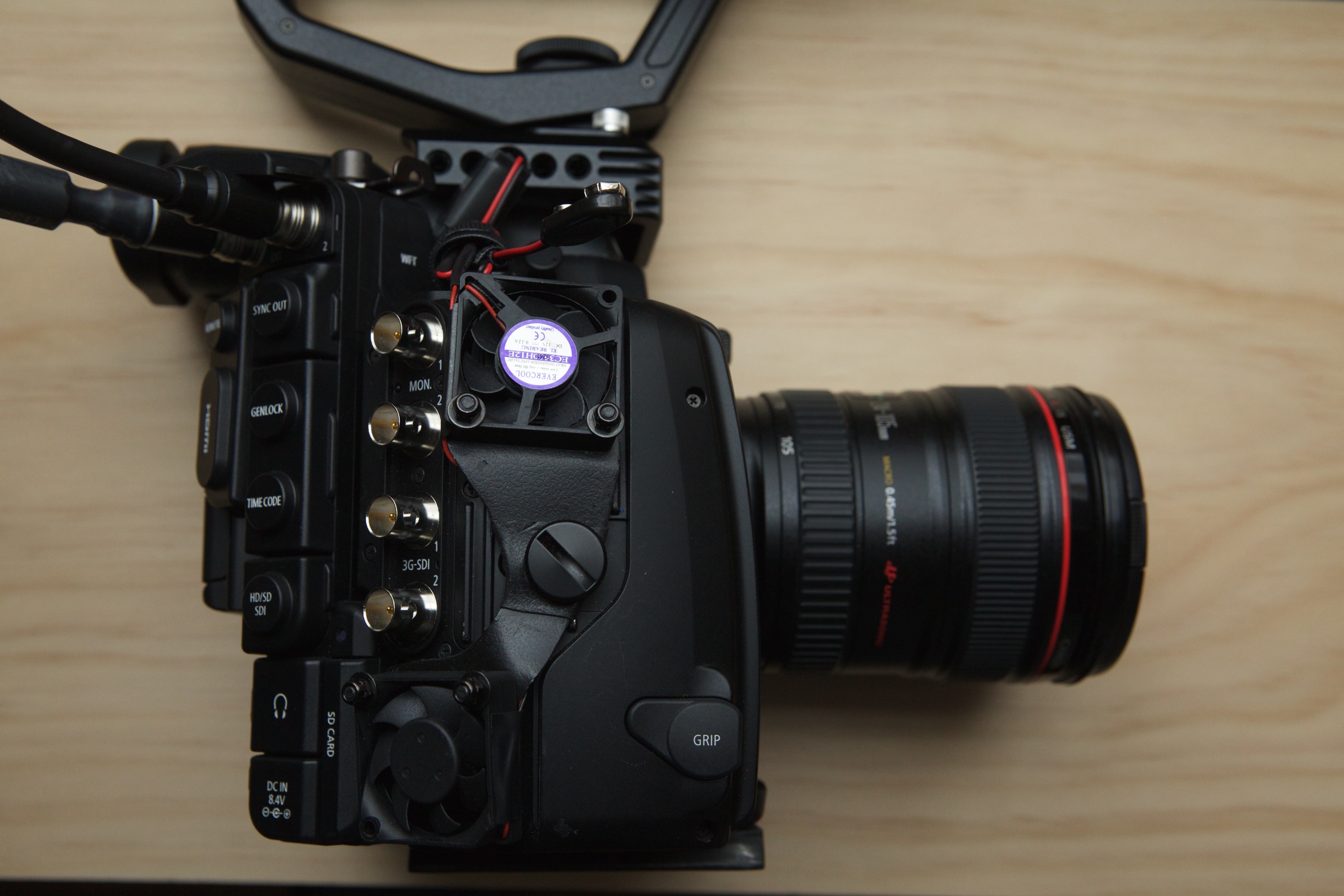 I had learned on line that Abel Cine had at one point created a $500 external fan system for the Canon C500 and even though I had a working unit, I called Able Cine to see if I could order one of their units in the hopes of having a more properly fabricated unit. I want things to look as clean and professional as possible for my clients. When I called Abel Cine it became quickly aparent that this product was somewhat obscure to the sale people, but after some research and a call back I was informed by the nice people at Abel Cine that they had sold their last unit and would not be producing any more in the future. Although rough my unit was working perfectly so I was not that disappointed, however others on the dvxuser.com forum where concerned about the issue and some people had contacted me to see if I could make a unit for their C500 camera. I was interested, because I wanted mine to look cleaner, but I was not about to fabricate another using a jigsaw to cut 22-gauge sheet metal.  I looked for, studied my needs, and ordered the proper supplies to better produce the units. My intentions are not to go into the long term business of making these units, but at this point I am certainly willing to produce units for people out there who are looking to extend the life and usage of this beautiful Canon C500 camera.

I selected the Evercool fans I am currently using because they have a high RPM of 9000 and they move a good bit of air at 5.53 CFM. They are a bit louder than some slower RPM lower CFM competitors at 34.9 dBA, however when power a 12v fan off a 9v battery the fan is going to slow down RPM and run quieter. I personally feel the fans are plenty quiet for interview settings and the sound is constant which is a good thing. In my humble opinion the internal Canon C500 fans are much too noisy to leave on all the time and the ramping up and down of the fans during a longer interview is distracting and potentially a real audio problem for some people. I know sound guys that would frown at me when hearing those internal fans. 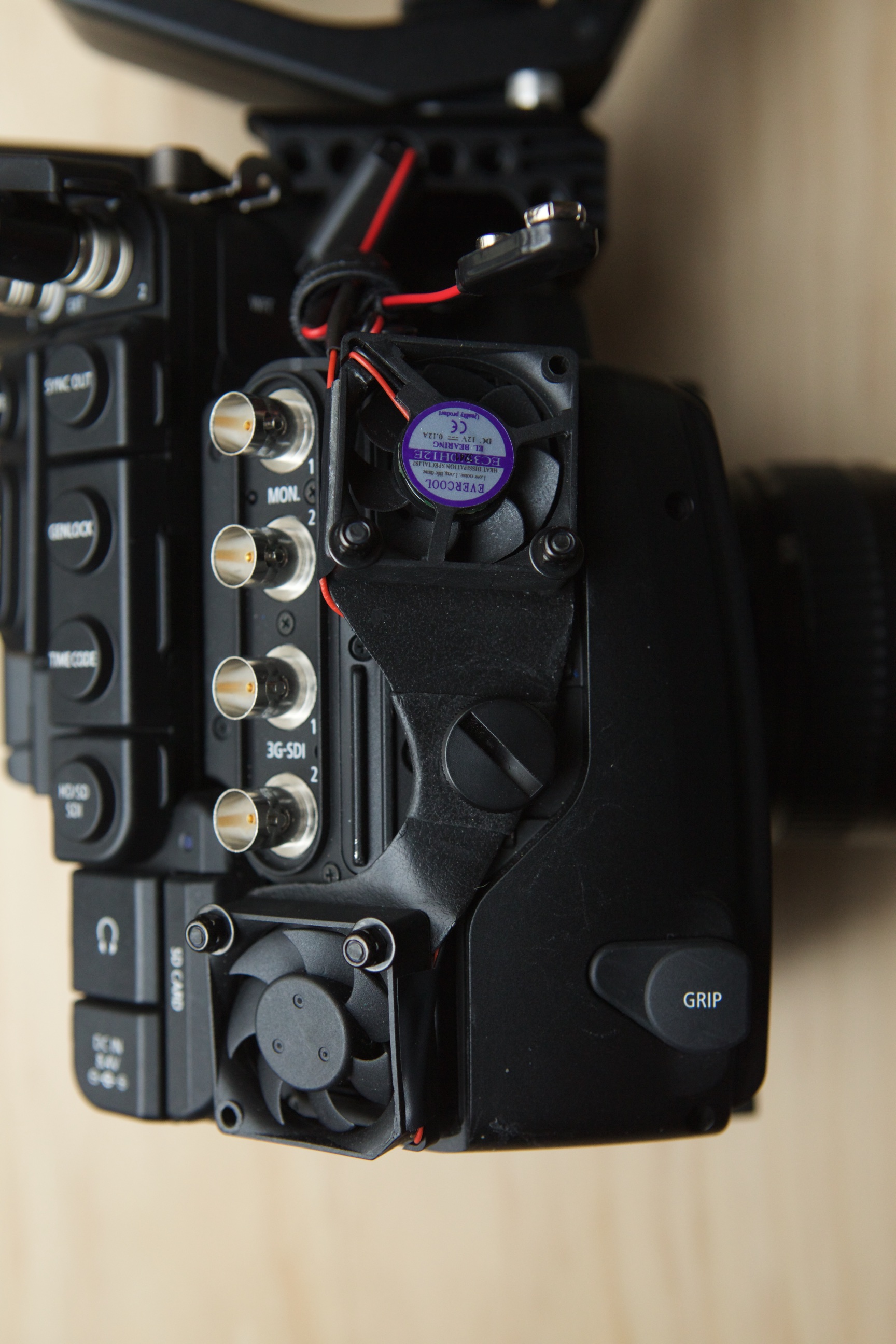 I do most of my video production in Maryland on interview and documentary work. I also shoot TV Commercials, Music Videos, and Promo Videos. My company PulseCinema also produces full productions for our clients. We predominantly film in air conditioned environments where the temperatures are in a comfortable range. I am very happy with the results of my external fan unit and have not had the internal fans turn on during our film shoots while using this external fan system. With that said, I cannot promise that in warm situations the internal fans won’t come on. Canon’s manual says in “Automatic” mode the fans turn on once the internal camera temperature reaches 77 degrees Fahrenheit. I am not sure if that applies to the current firmware. I would think if you are in that warm a situation, this unit would increase the time between the internal fan triggering, but I have not tested in all situations and don’t plan to… I did run a heat test for my own reference. This video shows how quick and easy it is to put the fan unit on to the Canon C500, it also shows the Canon C500 in a warm temperature (1hr above 79+ degrees, a half hour of that time at 86 degrees) environment next to a brand new digital thermometer. I tested this thermometer against our house thermometer which ran 2 degrees warmer than this unit in the video. Meaning the house thermometer would show a warmer temperature if placed in the same position as the thermometer in the video. My self fabricated external fan kept the internal fans from triggering for an hour ( TC 02:03:27:00 ) at which time I remove the fan system, the yellow fan warning light comes on and soon afterwards the internal fan kicks in.  I have no audio with the video because I left the camera sound on auto and I feel the boosting of the audio misrepresents what things would sound like in a proper interview set up while controlling sound levels. I apologize in advance if this bothers anyone, but I still feel this video shows what is going on with the camera.  ( https://vimeo.com/198885076 )

I have surely spent over the $500 that Abel Cine was asking for the units they had produced and have spent a lot time testing and experimenting. I would have been quiet happy to have just bought one of their units, but they made it clear they would not make more units. At the end of the day, I love an engineering challenge, so that’s why you are reading this blog post. On a brief tangent: (One of my colleagues has asked me to post photos and dimensions of a C-Stand box I built for my RocknRoller carts. It accepts 6 – C-Stands and a load of other items. I won’t be building these for people, but for those interested, I will do a blog, give the dimensions, and take some photos of the old box so you can build your own if so desired. When you see how much we can put in it and how useful it can be on set, you may just want to build your own… a jigsaw, a drill, and some carefully chosen pieces of wood can make it a fairly easy project.)

I am willing to make “one off” units of these external fan systems for people, but realize they are all hand made, no two will be exactly alike, they should be a big help in quieting the C500 fan noise in many situations but I can not guarantee they will be 100% effective in all situations. They are powered by a 9v battery or you can pick up a 6-AA case that runs at 9v and has a 9v connection point.

About me: I am a DP – Director – Editor working on film and video productions in Maryland, Washington DC, Virginia and beyond. I most frequently serve as Cinematographer collaborating with other Directors and am very happy to make images!